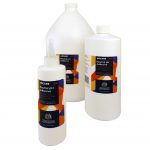 Four other PVA adhesives, considered conservation standard by their manufacturer/retailer, were used in testing for comparative purposes. Tests were performed to determine the following; pH, Opacity, Off-gassing (Oddy test). A summary of the test and its results are detailed below:

Arcare pH adhesive was tested to show a pH of 5.9 (with an accuracy of +/- 0.05 pH). The other adhesives tested ranged from 5.8 – 6.2. All of the adhesives tested were considered safe for use with organic materials.

The range of adhesives were tested for their colour and opacity using a chromaticity meter. Cast at a thickness of around 1.5mm and dried to create a sample thick enough to register a reading (it’s accepted that this is much thicker than when actually used in conservation).

The image below recreates the difference in values provided by the test results using the L* a* b* values recorded (including the corrected background value).

Arcare PVA, although displaying an average colour change value of Eab 17.56 against a white background, was also one of the least opaque when measured against a black background. Combining the two figures gives an overall performance figure.

The Oddy test is a qualitative test for off-gassing, performed by observing corrosion in three metallic tokens (silver, lead & copper) sealed in an oven over 28 days at 60°C. Each metal detects corrosion in a different set of corrosive agents and a ‘Pass’, ‘Temporary use’, or ‘Fail’ grade is applied according to the level of corrosion perceived.

Of the five adhesives tested, Arcare pH neutral PVA adhesive was one of three which did not fail any of the tests.

Other qualitative observations made during the tests showed that, once dried, PVA 1 became brittle and shattered when cut with scissors. PVA 3 remained very flexible and was tackier than the other PVA samples after the Oddy test had been performed.

The results of the tests show that Arcare PVA is a consistently high quality adhesive which can be relied upon in a variety of applications.